This bill requires the Department of Defense to authorize inclusion on the Vietnam Veterans Memorial Wall in the District of Columbia of the names of the 74 crew members of the USS Frank E. Evans killed on June 3, 1969. 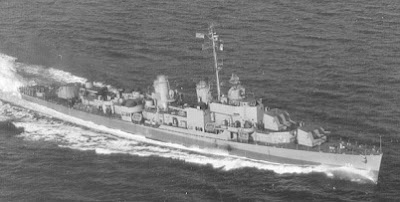 According to the US Navy Awards file, Frank E. Evans served in the waters off Vietnam for 12 days from July to September 1965. Evans was again in the vicinity of Vietnam for 61 days from August to November 1966. Evans returned to Vietnam and served there for 66 days from October 1967 to 20 February 1968. During the Tet Offensive, on 3 February 1968, Frank E. Evans provided naval gunfire support to the 101st Airborne Division near Phan Thiết against the 840th VC Battalion. Evans also spent an additional 14 days in 1969 in the Vietnam war zone.
Collision with HMAS Melbourne
USS Frank E. Evans post collision
At around 3:00 a.m. on 3 June 1969, between Vietnam and Spratly Island, Frank E. Evans was operating with the Royal Navy, Royal Australian Navy and Royal New Zealand Navy in company with the aircraft carrier Melbourne which was in the process of going to flying stations and all ships in the formation were running without lights. Melbourne radioed Evans, then to port of the carrier, to take up the rescue destroyer position. The logical movement would be to turn to port and make a circle taking up station on the carrier's port quarter. However, since the conning officer on Evans misunderstood the formation's base course and believed they were starboard of Melbourne, they turned to starboard, cutting across the carrier's bow twice in the process. Frank E. Evans was struck at a point around 92 feet from her bow on her port side and was cut in two. Her bow drifted off to the port side of Melbourne and sank in less than five minutes taking 73 of her crew with it. One body was recovered from the water, making a total of 74 dead. The stern scraped along the starboard side of Melbourne and lines were able to be attached by the crew of Melbourne. Around 60–100 men were also rescued from the water.
KEEP READING
Posted by AgentOrangeZone at 1:13 PM