Taxpayers Paid Millions to Design a Low-Cost Ventilator for a Pandemic. Instead, the Company Is Selling Versions of It Overseas.

READ THE STORY
As coronavirus sweeps the globe, there is not a single Trilogy Evo Universal ventilator — developed with government funds — in the U.S. stockpile. Meanwhile, Royal Philips N.V. has sold higher-priced versions to clients around the world.
Five years ago, the U.S. Department of Health and Human Services tried to plug a crucial hole in its preparations for a global pandemic, signing a $13.8 million contract with a Pennsylvania manufacturer to create a low-cost, portable, easy-to-use ventilator that could be stockpiled for emergencies.
This past September, with the design of the new Trilogy Evo Universal finally cleared by the Food and Drug Administration, HHS ordered 10,000 of the ventilators for the 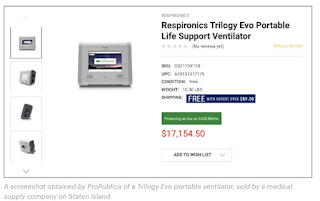 Strategic National Stockpile at a cost of $3,280 each.

But as the pandemic continues to spread across the globe, there is still not a single Trilogy Evo Universal in the stockpile.
Instead last summer, soon after the FDA’s approval, the Pennsylvania company that designed the device — a subsidiary of the Dutch appliance and technology giant Royal Philips N.V. — began selling two higher-priced commercial versions of the same ventilator around the world.
“We sell to whoever calls,” said a saleswoman at a small medical-supply company on Staten Island that bought 50 Trilogy Evo ventilators from Philips in early March and last week hiked its online price from $12,495 to $17,154. “We have hundreds of orders to fill. I think America didn’t take this seriously at first, and now everyone’s frantic.”
Last Friday, President Donald Trump invoked the Defense Production Act to compel General Motors to begin mass-producing another company’s ventilator under a federal contract. But neither Trump nor other senior officials made any mention of the Trilogy Evo Universal. Nor did HHS officials explain why they did not force Philips to accelerate delivery of these ventilators earlier this year, when it became clear that the virus was overwhelming medical facilities around the world.
An HHS spokeswoman told ProPublica that Philips had agreed to make the Trilogy Evo Universal ventilator “as soon as possible.” However, a Philips spokesman said the company has no plan to even begin production anytime this year.
Instead, Philips is negotiating with a White House team led by Trump’s son-in-law, Jared Kushner, to build 43,000 more complex and expensive hospital ventilators for Americans stricken by the virus.
KEEP READING
Posted by AgentOrangeZone at 8:32 AM