READ THE STORY
In early April of 2001, an advance team for a 95-member group of military service members visited the post-war Vietnam, coordinating the logistics to begin work at six MIA recovery sites the following month – the unit's 65th expedition, called a Joint Field Activity. For this, a Russian-made M-17 helicopter was chartered from the Vietnamese military to aid in expediting equipment and personnel – as JTF-FA had been doing since 1992, according to Alan Liotta, acting director of the POW-MIA office. 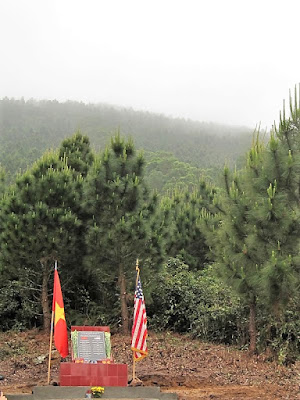 Late on the afternoon of Saturday, April 7th, 2001, one of the chartered helicopters was ferrying personnel from Vinh to Hue.
A Vietnamese official said the helicopter had been on a flight to the central city of Hue, leaving Vinh at 4:15 in the afternoon, and had been scheduled to stop at Dong Hoi, the Quang Binh provincial capital, before heading south to Hue. But earlier that day, a member of the JTF-FA team called their headquarters in Hawaii to report that they were canceling a stop in Dong Hoi because of bad weather.
Aboard the helicopter, piloted by Vietnamese, were seven Americans – all active duty military servicemen – and nine Vietnamese military men. The Americans: Army Lieutenant Colonel Rennie M. Cory Jr., the outgoing commanding officer of Det 2.

The other Americans aboard were Army Lieutenant Colonel George D. Martin III, the incoming commanding officer of Det 2, from Hopkins, South Carolina, and who previously commanded the 1st Battalion, 32nd Infantry at Fort Drum, New York; Air Force Major Charles E. Lewis, the unit’s deputy commander, from of Las Cruces, New Mexico, and, prior to his JTF-FA service, was responsible for the design and construction of the F-15 Eagle mounted on a pedestal at the entrance to the 333rd Fighter Interceptor Wing at Eglin AFB in Florida, and was a a military-history buff trained as an engineer; Army Sergeant 1st Class Tommy J. Murphy, a Mortuary Affairs specialist with the part of Central Identification Laboratory Hawai'i (CILHI) and the team's Sergeant who was from Georgia, but lived in Honolulu; Air Force Master Sergeant Steven L. Moser, an Vietnamese Intelligence Analyst & Linguist who was from San Diego, but also lived in Honolulu; Navy Chief Petty Officer Pedro J. Gonzales, a Hospital Corpsman from Buckeye, Arizona, who was a crack diver and served as the team's medic; and Air Force Technical Sergeant Robert M. Flynn, a Vietnamese Linguist from Huntsville, Alabama, who served as Cory's translator.