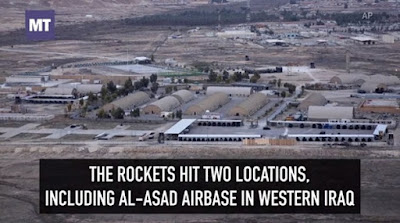 On Friday, more than a week after Pentagon officials reported no injuries in a rocket attack on an Iraqi base housing U.S. troops, reports surfaced that 11 service members had been flown out of the country to treat persistent symptoms of traumatic brain injury. Tuesday, military officials acknowledged even more troops were being evaluated for injuries.
“I heard that they had headaches, and a couple of other things,” he told a reporter during a press conference at the World Economic Forum in Switzerland. “But I would say, and I can report, that it is not very serious.”
Officials clarified Friday that they were unaware of the concussions until Thursday evening, and that they would be updating reporting procedures for possible TBIs.
The Defense Department has been grappling with the issue of TBI throughout the Global War on Terror, as the sometimes invisible injury can be hard to detect, service members can be reluctant to report their suffering and the long-term damage can wreak havoc on mental and behavioral health.
Concussion, or mild traumatic brain injury, TBI, has been the most common serious injury to U.S. military personnel since 2000, with more than 408,000 cases diagnosed.
While most people who suffer concussion recover within seven to 10 days with appropriate treatment, severe or multiple concussions can have lingering and even lasting or progressive effects such as degeneration or brain changes that put aging veterans at risk for dementia, Alzheimer’s, Parkinson’s disease and other neurological conditions, according to researchers at the Department of Veterans Affairs Boston Healthcare System.
KEEP READING
Posted by AgentOrangeZone at 8:41 AM