READ THE STORY
WASHINGTON — Senate lawmakers will start their work next month on legislation to extend disability benefits for nearly 90,000 veterans who worked around toxic chemicals during the Vietnam War but have been denied compensation for that exposure. 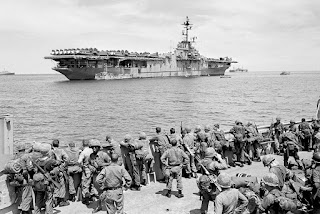 The Senate Veterans’ Affairs Committee is planning an Aug. 1 hearing on the issue, one that committee Chairman Johnny Isakson, R-Ga., has called a “top priority” for the remainder of the year.
Last month, House lawmakers overwhelmingly approved legislation dealing with the plight of “blue water” Vietnam veterans, adding a new Veterans Affairs home loan fee to pay for the $1.1 billion needed to cover benefits costs.
Supporters of that measure had pushed for the Senate to quickly approve the measure, but Isakson has said he wants to hold public debate on the issue to ensure that lawmakers aren’t overlooking needed improvements to the proposal.
House passes benefits fix for ailing ‘blue water’ veterans, now awaits Senate’s move
House passes benefits fix for ailing ‘blue water’ veterans, now awaits Senate’s move
The bill would provide disability payouts for about 90,000 veterans who served on ships off the coast of Vietnam.
But under existing rules those veterans must provide proof of exposure to the chemicals to receive disability benefits. In contrast, troops who served on the mainland or patrolled inland rivers during the war are assumed to have been working with or near Agent Orange and are given special expedited status when filing disability benefits claims.
Posted by AgentOrangeZone at 4:39 PM