Does glyphosate cause cancer? Monsanto herbicide trial begins in US

A California man is dying of cancer, and he is blaming the glyphosate found in Monsanto's Roundup herbicide. From the WHO to the EU, international bodies show the research is anything but clear. DW examines the case.
A San Francisco court began hearing opening statements in the first US trial of its kind on Monday: A California man dying of cancer is suing agrochemical giant Monsanto, claiming the popular weed-killer Roundup is to blame for the disease.
The trial of 46-year-old Dewayne Johnson was expedited due to his likely death in the coming months from non-Hodgkin lymphoma, according to his lawyer.
What happened?
Johnson, who worked as a groundskeeper at a school near San Francisco for two years, argues that Monsanto's Roundup herbicide caused his cancer and that the company failed to warn against the product's fatal effects, according to court documents.
Johnson sprayed Roundup on school grounds "20 to 40 times per year, sometimes hundreds of gallons at a time," his lawyer told AFP news agency.
Two years after starting his job in 2012, Johnson was diagnosed with cancer. He filed the lawsuit against Monsanto two years later after being unable to work due to the disease.
Johnson has "suffered severe and permanent physical and emotional injuries" and "endured economic loss (including significant expenses for medical care and treatment) and will continue to incur these expenses in the future," according to the lawsuit. 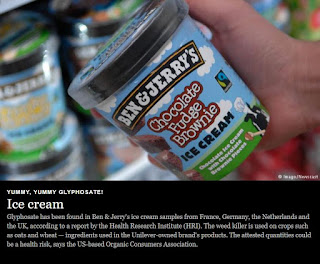 Glyphosate has been found in Ben & Jerry's ice cream samples from France, Germany, the Netherlands and the UK, according to a report by the Health Research Institute (HRI). The weed killer is used on crops such as oats and wheat — ingredients used in the Unilever-owned brand's products. The attested quantities could be a health risk, says the US-based Organic Consumers Association.
Does glyphosate cause cancer?
While critics are quick to describe glyphosate — the main chemical substance in Roundup — as carcinogenic, research is far from definitive on the question. Here's what international bodies, environmental authorities and researchers have to say:
The EU's European Food Safety Authority said in 2015: "EU peer review experts, with only one exception, concluded that glyphosate is unlikely to pose a carcinogenic hazard to humans and the evidence does not support classification with regard to its carcinogenic potential."
The WHO's International Agency for Cancer Research in 2015 classified glyphosate as "probably carcinogenic to humans." At the same time, it said that, "For the herbicide glyphosate, there was limited evidence of carcinogenicity in humans for non-Hodgkin lymphoma. The evidence in humans is from studies of exposures, mostly agricultural, in the USA, Canada and Sweden published since 2001."
The US Environmental Protection Agency (EPA) in 1985 labeled glyphosate a "possible human carcinogen," but that classification was rescinded in 1991 by an internal committee, saying there wasn't enough evidence to claim that it was carcinogenic. It was consequently labeled a chemical with "evidence of non-carcinogenicity for humans." A new review process launched in 2015 said data "at this time do no (sic) support a carcinogenic process for glyphosate."
Posted by AgentOrangeZone at 12:18 PM