Burn Pits and the VA: The Impact of the Department of Labor’s Landry Decision on Disability Claims Pending Before VA

READ THE STORY
For the first time, a federal agency recognized that exposure to burn pits used at a US military forward operating base may cause lung disease. This January an administrative law judge (“ALJ”) in the Department of Labor (“DOL”) found that burn pit exposure caused lung disease in a government contractor working in Iraq. Ever since, social media platforms have been abuzz with hopeful chatter that the DOL decision will spark the Department of Veterans Affairs (“VA”) to follow suit and acknowledge the connection between burn pits and negative health conditions. While DOL’s decision evidences a hopeful crack, the dyke has not yet fully burst. Although the ALJ found that a government contractor presented enough evidence to show that exposure to the burn pits caused her lung disease, the DOL decision does not control decisions made by the VA. Veterans with claims pending before VA for that relate to burn pit exposure must continue to gather medical evidence to bring a successful benefits claim — a daunting task when it comes to proving causation. 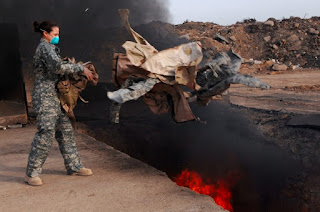 Veronica Landry worked as a government contractor at two forward operating bases in northern Iraq from March 2004 through February 2005. While in Iraq, Ms. Landry lived and worked within a mile of the burn pit at each base. Ms. Landry worked outdoors about a third of the time and testified that she was exposed to smoke from the burn pits every day during her deployment. As has become well known, the military used such burn pits to dispose of a variety of items containing various toxins, such as tires, vehicle parts, hazardous medical materials, plastic water bottles, and ammunition.
After returning to the U.S., Ms. Landry began to develop respiratory problems. These problems included several respiratory “episodes” and an overall decrease in lung function. Ms. Landry was eventually diagnosed with mild lung disease after her doctor conducted testing and a lung biopsy. Ms. Landry’s doctor offered a medical opinion that her mild lung disease was related to her exposure to burn pits, dust, and working outdoors in northern Iraq. However, the doctor did not believe that her lung disease contributed to her respiratory episodes after returning home.
Judge Determines that Burn Pits Contributed to Ms. Landry’s Lung Disease
After reviewing the facts, the ALJ determined that Ms. Landry presented sufficient evidence to show that she her lung disease arose from deployment-related conditions, specifically, exposure to burn pits. This decision marked the first time a federal agency recognized that exposure to a burn pit used at a US military base contributed to deployment-related lung disease.
Posted by AgentOrangeZone at 10:40 AM