READ THE STORY
Life was about to take a sudden, shattering turn as Paula Twitty Bushman stood in her green, dress uniform of the U.S. Marine Corps, ready for another day in traffic court at Camp Lejeune.
The young Marine was a paralegal and four months pregnant. Suddenly, she felt discomfort below her waist and saw blood running down her leg and onto her black patent-leather shoes. A colonel at the court saw a burst of fear cross her face.
When Bushman awoke at the base hospital, confused and uncertain, a military doctor told her the news: The child wasn’t right. We had to take it.
The 1983 loss began years of torment that included another child stillborn at eight months, and health problems that continue to plague her.
“Something was stolen from me,” said Bushman, now 55. “Something was stolen without me ever saying it could be taken.”
As many as a million people stationed at the Marine base from 1953 to 1987 became 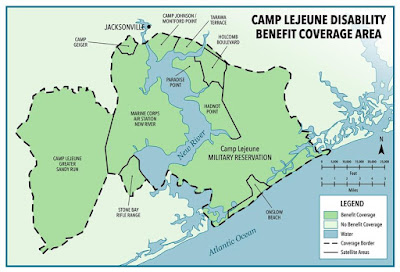 part of one of the darkest chapters in the Corps’ history. Toxins linked to miscarriages, birth defects, cancers and neurological behaviors polluted the drinking water.
Those exposed not only drank the poison water, they used it to bathe, swim, cook, wash clothes — and mix baby formula.
Georgia now has one of the largest concentrations of Lejeune veterans and dependents in the country with 10,561 on a national registry of those exposed to the contamination. Nearly 259,000 men and women across the country have joined the list.
“We were there to do a job and we did it, and now 30 years later we’re all sick,” said Crystal Dickens, a Lejeune Marine veteran in DeKalb County who lost two babies in pregnancy and now suffers from chronic health conditions. “Even the daycare, the mess hall, everywhere you went the water was contaminated and we didn’t know.”
Reluctantly, Congress in 2012 extended cost-free VA health care coverage to veterans and a more limited plan for family members suffering from conditions linked to the polluted water, acknowledging for the first time the harm it caused. The Obama administration followed in January 2017 with a plan to provide $2 billion in disability benefits to Lejeune veterans.
Posted by AgentOrangeZone at 5:15 PM