The facts about farmed salmon you wish you didn’t know 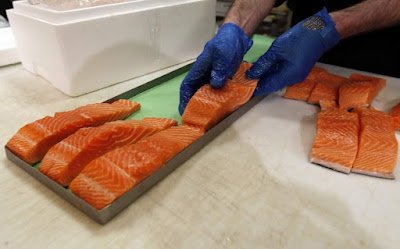 • Wild salmon get its lovely rose color from eating krill and shrimp. Farmed salmon, because it eats those pellets, is grey. To make it more appetizing to consumers, farmers add dyes to their feed.
• Studies show that farmed salmon contains up to eight times more PCBs — cancer-causing industrial chemicals that were banned in 1979 — than wild, as well as high levels of mercury and dioxins from herbicides like Agent Orange.
• We’ve all heard that omega-3 fatty acids are essential nutrients for nervous system, heart and brain health. Omega-3 in fish are derived from plants like algae, leaves and grass. Because farmed salmon are fed a lot of soy, they are high in omega-6, which you don’t want: Omega-3 fights inflammation while omega-6 promotes it.
• Then there are environmental concerns: pollution from fish excrement and uneaten feed; farms releasing diseases to wild fish stocks; escapees unwittingly released into the wild where there are no natural populations and then outcompeting native fish populations. Many people also have ethical concerns about farming carnivorous fish. To produce farmed fish such as salmon, you must feed them about three times their weight of wild-caught fish. That’s like feeding a whole sheep to a chicken to get that poultry to harvest weight.

Posted by AgentOrangeZone at 8:40 AM