READ THE STORY
In 1981, Lt. Col. Kris E. Roberts, then head of maintenance at U.S. Marine Corps Air Station Futenma, discovered dozens of barrels of hazardous waste — some believed to contain Agent Orange — buried on the installation, a story first reported in 2012 in The Japan Times (bit.ly/okinawaaovet) In 2015, the Department of Veterans Affairs ruled he had been exposed to hazardous chemicals and awarded him compensation (bit.ly/okinawaaocomp) The U.S. government continues to deny Vietnam War-era defoliants were ever stored on Okinawa. 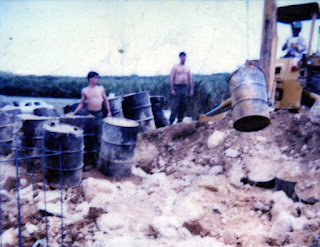 Becoming a U.S. Marine Corps officer is a privilege that very few have the honor of earning. However, with that privilege comes awesome responsibilities.
Being a Marine Corps officer is far more than successfully accomplishing the mission — even more important is the welfare of the people you are responsible for. They are your family — and for me, this includes the Okinawan workers with whom I worked at MCAS Futenma more than 35 years ago.
As a young officer I was taught that effective leadership means doing the right thing at the right time. You do that by asking three important questions: “Is it legal, is it moral and is it ethical?” If any of the answers is “No,” you do not do it.
On that day 36 years ago when we discovered row after row of barrels of hazardous chemicals buried on MCAS Futenma, everything I learned about Marine Corps leadership was forever changed. At least three senior officers engaged in a cover-up and decided to place their careers over the welfare of the men and women I was responsible for. Worse yet, in 2013, when the U.S. Department of Defense financed an investigation into Agent Orange on Okinawa, the report’s author failed to interview myself or others.
MORE
Posted by AgentOrangeZone at 12:39 PM