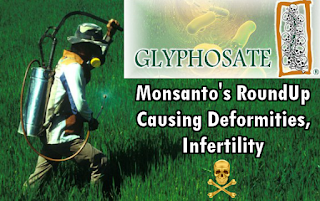 (Natural News) In a significant victory for consumer safety — and a devastating blow to Monsanto — California’s Office of Environmental Health Hazard Assessment (OEHHA) has declared that glyphosate weed killer is a known, cancer-causing carcinogen that will be added to the scope of Proposition 65.

Glyphosate weed killer, also sold under the Roundup brand name by Monsanto, is identified by California under CAS #107-83-6, which lists “cancer” as a known endpoint, and invokes “LC” (Labor Code) as the justification for the categorization.
“The listing is the latest legal setback for the seeds and chemicals company, which has faced increasing litigation over glyphosate since the World Health Organization’s International Agency for Research on Cancer said that it is “probably carcinogenic” in a controversial ruling in 2015,” reports Reuters, which has a pro-GMO bias. “Dicamba, a weed killer designed for use with Monsanto’s next generation of biotech crops, is under scrutiny in Arkansas after the state’s plant board voted last week to ban the chemical,” Reuters added.
Beginning July 7th, retailers in California must add cancer warning labels to glyphosate products. Unfortunately, cancer warnings will not be required on foods sprayed with glyphosate or grocery products saturated with the cancer-causing herbicide. Many non-GMO crops such as wheat and barley are currently sprayed with glyphosate to speed their drying in the fields before harvest. This means that glyphosate contamination is now commonly found even on crops that are not genetically engineered, and it’s now a common contaminant in non-organic wheat products such as cereals, breads and muffins.
MORE
Posted by AgentOrangeZone at 7:13 AM