READ THE STORY
CAMP FOSTER, Okinawa — There have long been rumors that Agent Orange was stored or used on Okinawa, but no one has been able to find proof.
Now two servicemembers who served on the Japanese island during the Vietnam War era have won court cases claiming they developed ailments from exposure to the toxic defoliant. 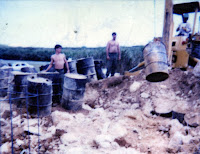 Judges in the separate lawsuits cited specific diseases that have been linked to Agent Orange and a lack of proof that the chemical compound wasn’t on Okinawa, based on a two-year gap in records and other evidence.

The judges were careful to limit their rulings to the specific cases, likely to avoid opening the door for hundreds of former servicemembers to seek class-action status for physical problems that may be linked to Agent Orange.
Pentagon officials referred requests for comment to the Department of Veterans Affairs, which declined to answer questions or discuss how many similar cases there have been in recent years.
Each case is heard on its own merits, the agency said in a statement to Stars and Stripes.
“VA can grant a claim and award disability compensation if there is evidence of a current disability, an in-service exposure, and a medical nexus or link between the in-service exposure and the subsequent development of the illness,” the statement said. “VA has no credible evidence of Agent Orange use, storage, testing, or transportation in Okinawa, and thus no evidence to support claims of exposure to Agent Orange during military service in Okinawa.”
The U.S. military began using plant-killing chemicals called herbicides in the 1950s to defoliate military facilities.
MENU
Posted by AgentOrangeZone at 8:19 AM