http://wqad.com/2015/11/24/aledo-mom-says-military-burn-pits-in-iraq-killed-her-soldier-son/
An Aledo, Illinois mom is pushing for more awareness, detection, and treatment for soldiers exposed to  toxic burn pits used in Iraq;  pits that she believes poisoned her soldier son and caused his deadly cancer. 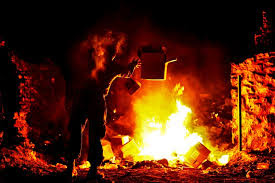 "It's sad, it's just so sad and there's more and more of them passing away becoming ill. Every single day," said Joan Wells; she lost her son Sgt. Jeff Wells in August of 2015.
"He had a lump come up on his arm right here in July of last year. He went to the VA hospital in August 2014, and they had no clue what it was," she said.
Jean says Sgt. Wells was bounced around by the Veterans Administration in Chicago from inexperienced residents, from doctor to doctor, and he was not diagnosed until nine months after his first visit.
"They didn't do a thing, and did not start treatments in May. It was spindle cell sarcoma, a very rare cancer. By the time they started chemo treatments, it was also on his liver, in his lungs, his pancreas," she said.
Wells believes burn pits in Iraq poisoned her son with their toxic smoke and fumes.  His barracks were near one of 230 burn pits used in Iraq and Afghanistan to get rid of garbage. The military burned massive amounts of plastics, medical waste, body parts, tires, and other toxic materials.
Now, soldiers are coming up with rare cancers, and respiratory ailments that are being linked to toxic fires.
"This is this generation's version of Agent Orange," Wells said.
MORE
Posted by AgentOrangeZone at 9:56 AM