After a drawn-out campaign longer than the war in which they served, Australia's Vietnam veterans have finally won an important battle in their fight for proper recognition of their service and sacrifice.
The Australian War Memorial (AWM) has decided the official history of the conflict should be rewritten to provide a more accurate account of the use of Agent Orange, the chemical herbicide blamed for a range of cancers and other health problems. 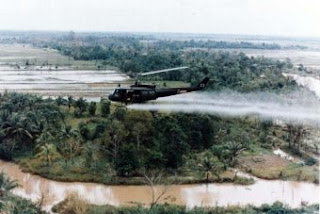 The AWM commissioned independent historian Professor Peter Yule from the University of Melbourne to write a new volume for its official history Medical Aspects of Australia's Involvement in Southeast Asian Conflicts, 1950-72.
Professor Yule has been tasked to give account of 25 years of new information and accounts from veterans themselves.
"As with any history itself, new information can be uncovered and new histories are actually able to be rewritten," the assistant director of public programs at the Australian War Memorial, Anne Bennie, said.
"The memorial's council has certainly considered this for some time [and] was certainly aware of the veterans' concerns that the official history does not contain the full extent of medical issues related to their service in the Vietnam War."
Between 1961 and 1971 the United States Air Force sprayed tonnes of Agent Orange over large areas of Vietnam.

"The American air force was very frustrated because during the Vietnam War they were unable to be used to their full potential because they couldn't see the ground," Graham Walker, who served as an Australian infantry commander in Vietnam, said.
MORE

Posted by AgentOrangeZone at 8:48 AM