http://www.truth-out.org/news/item/29261-usda-approves-untested-inherently-risky-gmo-apple
On Friday, February 13, the U.S. Department of Agriculture (USDA) approved the first genetically engineered apple, despite hundreds of thousands of petitions asking the USDA to reject it.
According an article in Politico, the USDA said the GMO apple “doesn’t pose any harm to other plants or pests.”
Great. But what about potential harm to the humans who consume them?
The Arctic Apple (Golden Delicious and Granny varieties), developed by Canada-based Okanagan Specialty Fruit, shockingly doesn’t require approval by the U.S. Food & Drug Association (FDA). The FDA will merely conduct a “voluntary review” before, presumably, rubber-stamping the apple for use in restaurants, institutions (including schools and hospitals) and grocery stores—with no meaningful long- (or even short-) term safety testing for its potential impact on human health. 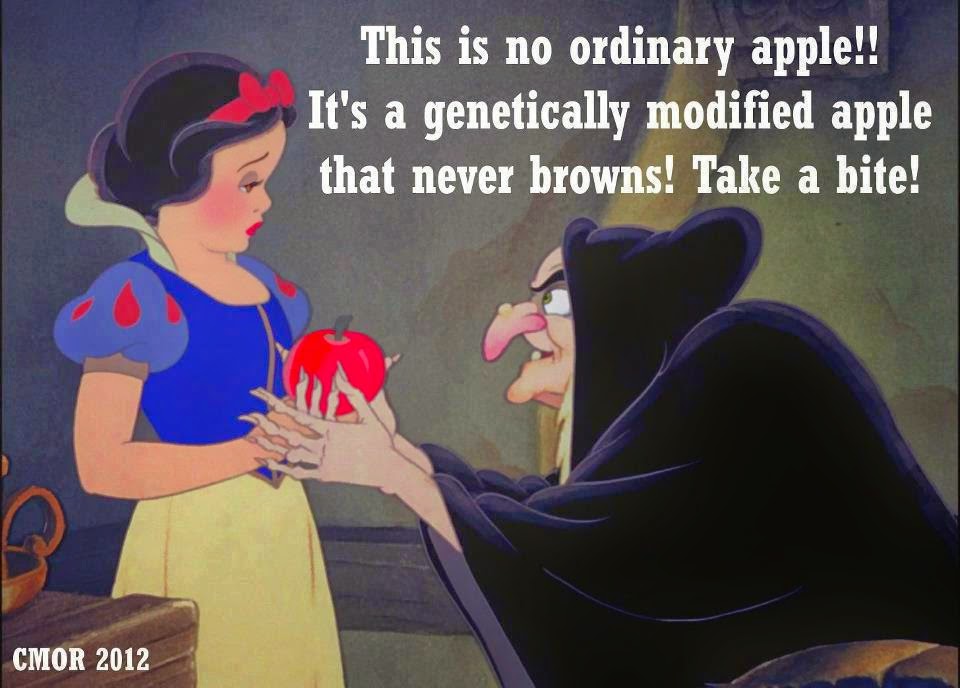 Here’s why that should concern every consumer out there, especially parents of young children.
In April 2013, we interviewed scientists about the genetic engineering technology used to create the Arctic Apple, whose only claim to fame is that it doesn’t turn brown when sliced. The benefit to consumers? Being able to eat apples without having any sense of how old they are?
Here’s what we learned about the technology, called RNA interference, or double strand RNA (dsRNA), from Professor Jack Heinemann (University of Canterbury, New Zealand), Sarah Agapito-Tenfen (from Santa Catarina University in Brazil) and Judy Carman (Flinders University in South Australia), all of whom said that dsRNA manipulation is untested, and therefore inherently risky:

Given that the dsRNA from our food, and presumably the Frankenapple, will enter the bloodstream and cells of consumers, safety research should be done BEFORE this GMO apple is put on the grocery shelf to prove that the dsRNA that enters consumers' bodies will not harm them. To date, no such research has been reported, so the Frankenapple is flying in the dark.
On the contrary, recent research has shown that dsRNAs can transfer from plants to humans and other animals through food. The biotech industry has always claimed that genetically engineered DNA or RNA is destroyed by human digestion, eliminating the danger of these mutant organisms damaging human genes or human health. But many biotech scientists say otherwise. They point to evidence that the dsRNA present in food survive digestion in the stomach and intestines and actually enter the bloodstream and tissues of the body, where it can influence the functioning of the eater's cells.
Some of the scientists also pointed out that GMO apples will likely lead to even greater use of pesticides, on a product that (unless it’s organic) already tests positive for 42 pesticides, according to the Pesticide Action Network’s analysis of the most recent USDA data.
Here’s why. Turns out the chemical compound that is shut off in the engineered fruit through RNA manipulation, in order to make it not oxidize or brown, is a chemical compound that also fights off plant pests. What happens when the apple’s ability to fend off insects is compromised? Growers will need to spray greater amounts. Those pesticides will eventually find their way into our bodies, either because we ingested the fruit, or breathed the air or drank the water where the pesticides were sprayed.
Posted by AgentOrangeZone at 8:47 AM