Agent Orange: A Code Word for Destruction of Our Environment 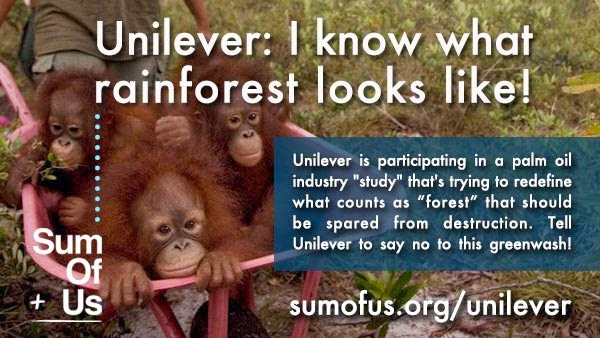 Unilever is supporting a dirty industry attempt to continue the destruction of Southeast Asia's rainforests. If it gets its way, orangutans could keep dying in the name of "sustainable" palm oil.

The consumer giant is attempting to ignore scientists' work and rewrite the rules on what counts as forest that should be spared from destruction, backed by the worst palm oil producers. It's a direct challenge to the strong scientific standards that groups from SumOfUs to Kellogg's to Mars have aligned behind. If we don't stop it, this could amount to a license for deforestation in the name of conservation, and undermine the huge progress we've made to save the orangutans.
Unilever is the world's largest palm oil user, and it's done the right thing in the past to support rainforest protection. It can do the right thing again, and we know that it's sensitive to consumer pressure. Right now Unilever thinks it can push this greenwash behind closed doors. But if we can put this into the public light, it won't be worth the risk for Unilever to continue.
Sign the petition now to tell Unilever not to greenwash rainforest destruction.
READ MORE: https://mail.google.com/mail/u/0/?tab=wm&pli=1#inbox/144fbf8f6eeb1130
Posted by AgentOrangeZone at 9:14 AM