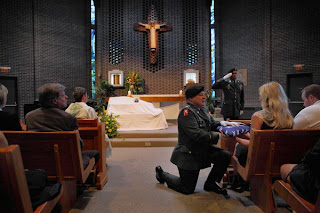 A U.S. Army soldier presents a folded U.S. flag to Christina Cooley at the memorial service in Evanston's Sheil Chapel for her father, Jack Cooley. Exposed to Agent Orange during his service in Vietnam, he died in July of multiple myeloma. At right is Christina's brother, John. (Tribune photo by Chris Walker / September 12, 2009)

Part 2 of a Tribune investigation finds that for many U.S. veterans, the bureaucratic fight to be compensated for health problems linked to Agent Orange amounts to a new and unexpected war, long after the shooting ended overseas.
http://www.chicagotribune.com/health/agentorange/

Jack Cooley delivered his final argument in a long, distinguished legal career from a hospital bed.

Four months before succumbing to multiple myeloma, the Chicago-area Vietnam veteran and federal magistrate judge wrote a 140-page claim for justice and filed it with the U.S. Department of Veterans Affairs. Cooley's message to the government was personal and direct: Agent Orange is killing me, and you need to take responsibility.

Cooley didn't know it last spring, but when the former Army artillery captain filed his disability claim, he was just entering a maddening bureaucratic maze many veterans know well. The VA would kick back Cooley's claim after a month, saying he lacked the required proof he'd served in Vietnam.
Posted by AgentOrangeZone at 9:24 AM