U.S., Vietnam split over whether defoliants used in war are to blame 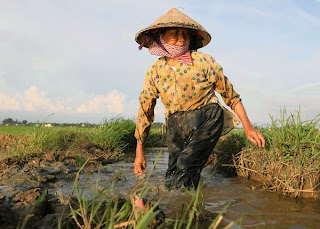 Dao Thi Kieu, 57, works her rice field outside of Bien Hoa, Vietnam. Her fields were sprayed with herbicides by the U.S. military during the Vietnam War. Of her eight children, seven were born with birth defects and five have died. Kieu also lost her husband, who fought for South Vietnam's army, to cancers associated with exposure to Agent Orange and other defoliants. (Tribune photo by Chris Walker / September 19, 2009)

The sun beats down on Dao Thi Kieu's straw hat as she hunches over thin strands of bright green rice plants, pulling them from beds submerged in muddy water and replanting them elsewhere.

These are the same paddies Kieu tended as a teenager during the Vietnam War, and she still remembers the planes that came in the mornings to spray Agent Orange and other defoliants while she worked.
Posted by AgentOrangeZone at 8:22 AM