Dayna and her son Keeyan - Keeyan is 8. He weighs 48 pounds

Dayna and Keeyan's story is brought to you by The Missouri Vietnam Veterans Foundation.

Dayna Dupuis Theriot writes a letter filled with questions, not the least of which is to whom she should send it for answers. She scours the Internet looking for such answers and finds only tantalizing clues, or more to the point, one clue, one connector between her son and the various abnormalities that have been visited upon him. The clue repeatedly shows itself, but never to the degree that she can say it is the answer with any certainty.

“Every time I put in one of Keeyan’s abnormalities with that information about my dad, Agent Orange in the first thing that would pop up,” she said. 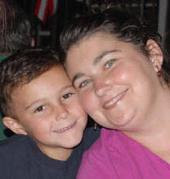 . With the exception of a too small body, his physical appearance gives no indication that her young son knows firsthand the medical mysteries that Dayna includes in her letter:

“Esophageal Atresia/stricture
“Dyslexia and learning disabilities
“Speech and hearing problems
“Asthma and allergies so severe that Keeyan is on Xolair injections (normally for people who are 12 years of age or older according to the Xolair Web site)
“Illecolitis (a form of Crohn’s disease)
“Premature Ventricular Contractions (heart disease).”

Her father, a Vietnam veteran who served in the Army, is under treatment for PTSD, but has never been diagnosed with a disease connected to Agent Orange. Nonetheless, pointing to the presence of Agent Orange in her Internet research, Dayna finds yet another clue hard to pin down .

“My father was in an area that was heavily sprayed with Agent Orange,” she said. “He’s been through a lot. I don’t know how he would handle it if we found out this kind of thing was transferred from his body to us. It would have a powerful emotional effect on him. I would hate for him to blame himself. What I’m doing now is just looking for answers. You don’t know who else is out there with the same problems.”

Dip in anywhere in her letter and “powerful emotional effect” becomes understatement.

“My son, Keeyan, was born August 2, 2000, weighting only 4 lbs., 14 oz.,” she writes. “He had problems before coming home with his sugar levels and body temperature. We stayed in NICU (Newborn Intensive Care Unit) for five days before allowing us to go home. He then came home to vomiting, choking, and almost losing him in our home.

“He was checked by his pediatrician to discover his esophagus was strictured. It was narrowed so severely that it only allowed a few drops in at a time and not even his own mucus could be digested. It is similar to Esophageal Atresia. He was admitted and the surgeon dilated the esophagus. It lasted two weeks before collapsing again. So in September 2000, only 4 weeks old, a thoracotomy was done. They would cut out the narrowed part and resection the damaged esophagus.

As her letter continues, it takes on a peculiar phenomenon of language, one in which mothers become conversant in a medical language usually reserved only for specialists, men and women who have spent the greater part of their lives studying such things. It falls to mothers to understand medical terms and procedures that would leave most people scratching their heads.

“After the procedure was done, he assured us that Keeyan would be fine,” she writes. “He then began vomiting, choking, and the esophagus was so irritated that it began to bleed. We began PH probe studies to find out what was going on. The studies showed reflux and it was really bad. So they put him on a drug given to patients with esophageal cancer to be able to tolerate feedings. It didn’t help …

“We went to see a Pediatric Surgeon for Rare Anomalies. He gave us a few options … He mentioned doing a fundoplication/nissen so he would not be able to vomit. The procedure was done at age 4 1/2 … only to be discouraged by vomiting and bleeding …"

Some of the questions Dayna asks are the same questions asked by the wives of other Vietnam veterans exposed to Agent Orange:
+If the children of women veterans are determined to suffer from such service connected disabilities, why are the children of male veterans excluded? (Dayna's son, as well as the children of other women, were born with conditions that are on the presumptive list for children of women veterans.)
+Studies show more defects in women than men. Why?
+There are cases of second and third generations, but no proven studies. Why?
+Are there more studies planned for future generations?
+In the small study of 24 Vietnam veterans, they all had some type of chromosomal changes. Why was the study stopped?

It is a proven fact, Dayna points out, that more children of Vietnam veterans suffer learning disabilities, health issues, asthma/allergies, birth defects, and other health issues. “They all seem familiar to me,” she says. Kids are also born with rare disorders that may show up later.

“It’s been rough,” she said. “You always have in the back of your mind that (answers) would leave you with some closure and you would be done with this. I mean, you have to live with it, but at least you know why and you say, OK, this is the way life is going to be. We’re going to have to live with it, like it or not. This has been my life for the last eight years. I have no idea how I get through this. It takes a lot.”
Posted by AgentOrangeZone at 7:38 PM