Burn pits: Human waste. Feces. Trash. Plastic. Batteries. Medical waste and supplies. Body parts. Yes, body parts. Dead animals. Chemicals. Paint. Tires. Anything and everything not wanted or used anymore. Burn it all. Pour diesel fuel on it, and light a match. Anyone would agree that this is quite the cocktail, with a very disturbing mix. 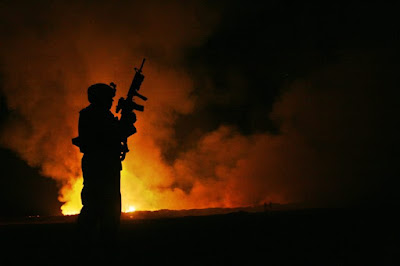 For everyone who has ever been to Iraq or Afghanistan, or who has a family member or friend who served, burn pits are not a secret. It’s extremely common knowledge. Everyone knows they suck and were a terrible aspect of any deployment.

What is a secret, shockingly enough, is how the Department of Veterans Affairs (the VA) is handling the severe health issues many veterans experience as a result of these burn pits. The VA is denying coverage to the vast majority of veterans who submit health claims as a result of constant and prolonged exposure to the toxic nature of burn pits.

In fact, the number of denied claims is quite high. According to data obtained from the VA by Military.com, as of March 31, the VA had denied 72 percent of burn pit claims.

To his great credit, burn pits and the health issues surrounding their use, have been something Jon Stewart has been working on, and advocating for years. God bless him for it. Just like the work he has done with First Responders, and those associated with the clean-up in New York City after 9/11, he’s trying to get the same care and attention to veterans with burn pit exposure.

Posted by AgentOrangeZone at 9:35 AM