Agent Orange is a mix of herbicides (plant-killing chemicals) and defoliant (a chemical used to remove leaves from plants and trees). It was used by the US military during the Vietnam War to destroy plants in large quantities. Agent Orange was one of the “Rainbow Herbicides,” alongside Agent Purple and Agent White. These herbicides were used and tested at Canadian Forces Base Gagetown, New Brunswick. Agent Orange was incorrectly claimed to have been used to clear public land in Northern Ontario between the 1950s and 1970s. It is unclear how many Canadians were exposed to the potentially deadly chemical. Nor do we know how many may have died as a result. 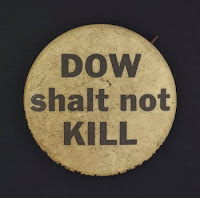 Chemical herbicides were first used in warfare by the British during the Malaya Emergency (1948–1960). Herbicides were employed to destroy both jungle cover and agricultural plants that might be used by Malayan guerrillas.  The British experience using herbicides served as a precedent for American use during the Vietnam War. Agent Orange was used in Vietnam from 1962 to 1971. The chemical was used to destroy the dense jungle canopy that provided shelter and cover for the North Vietnamese military and Vietcong guerrillas. Agent Orange was also used against agricultural plants and to control weeds around American military bases. It is believed that upward of 72 million litres of Agent Orange was sprayed over Vietnam and surrounding countries. Over 25,000 square kilometres of forest was defoliated.

Posted by AgentOrangeZone at 9:14 AM