The Life and Death of the Veteran Advocate

To many of the aging officials inside Vietnam Veterans of America (VVA), Kristofer Goldsmith represented the future. 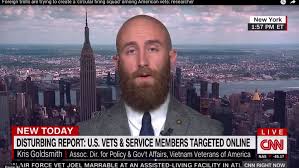 In his four years at VVA, Goldsmith cracked open the Department of Veterans Affairs (VA) to former service members like himself with so-called “bad paper” discharges. He also helped pass the Forever G.I. Bill, pushed back on VA privatization efforts, and spent months down an Internet rabbit hole investigating Russian trolls targeting those who served.

Then, this summer, as Goldsmith was wrapping up a detailed report on racial inequities in VA healthcare, he and 12 other staffers were abruptly laid off due to financial damage wrought by the coronavirus pandemic. In the blink of an eye, VVA’s once-sizable and strong government affairs team was slashed to two people. One of them is Goldsmith’s mentor, Rick Weidman, a gruff Vietnam veteran and VVA co-founder with a sweet side. 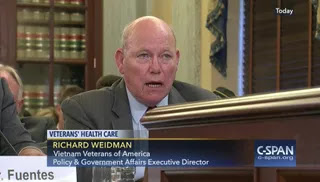 Weidman, like many vets, witnessed far too much violence in his time overseas as an Army medic. After he returned home, Weidman lent his voice to the unprecedented chorus of veterans speaking viscerally about war trauma. "I remember smoking a Camel cigarette and thinking, ‘This is all happening and I don't feel anything,’” Weidman once said while reflecting on his service. “I had successfully shut down to get the job done there. The problem is getting unfrozen later."

Weidman’s list of policy accomplishments is far too long to tick off here. But much of his energy has gone towards unfreezing veterans. Over many hard-fought battles, he’s successfully pushed the VA to properly recognize and treat PTSD. Weidman’s also spent years working to secure greater health benefits for veterans exposed to Agent Orange and other chemicals dumped over Vietnam as part of Operation Ranch Hand, a toxic mission with a cruel motto: “only you can prevent a forest.”

Weidman’s made a difference largely because he’s unafraid to challenge power. He sometimes forgoes his official, drawn-out VVA job title for something more striking: “Well-Known Troublemaker for Vietnam Veterans of America.”

Posted by AgentOrangeZone at 2:25 PM