READ THE STORY
Former Illinois Congressman Lane Evans is the subject of a new biography. Devin Hansen of Rock Island says it took eight years, plus two years to find a publisher, to finally release "Guts: The Lane Evans Story." 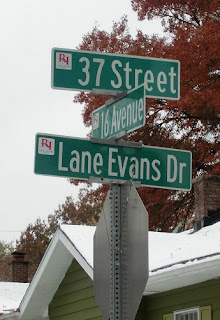 Hansen says he first got the idea in 2006, about the time Evans resigned from Congress due to the effects of Parkinson's Disease.
"I first met Lane in 1983 when I was 8 or 9 years old. I followed his career, as a political junkie growing up, and he always voted the way I would want a representative to vote. So I admired him a lot, and he had a lot of celebrity around here, he helped so many people. He had such a legendary status locally I thought it would be nice to bring that story to a national audience."
He scoured back issues of local newspapers, interviewed friends and associates, and spent time with the Lane Evans papers at Western Illinois University.
Evans' father was a firefighter and his mother was a nurse, and Hansen says Evans never forgot where he came from.
"His brother said politics was their sport - when they were around the dinner table that's what they discussed. And Lane saw how people, especially in the early 80's with the recession, how the working class was getting shafted, and he identified with a lot of people due to his upbringing. When he got into Congress, in the first year he was sleeping on the couch in his office, and he returned 10 per cent of his salary, and he said that constituents don't get these pay raises and benefits, so why should I."

Reporters can remember the day after each election, very early on cold November mornings, seeing a lone figure outside factories in the Quad Cities - that was Evans spending hours shaking hands and thanking his supporters.
And long with organized labor, some of his strongest supporters were farmers, but not all of them.
"The farmers - he kind of had a love-hate relationship with. He quit the Agriculture Committee after his first term and I think that upset a lot of farmers. But throughout his career he was always working for the small farmers, not the big agri-businesses And that was something a lot of people didn't necessarily understand."


Lane Evans also focused his attention in Congress on helping veterans - he served in the Marine Corps during the Vietnam War.
KEEP READING
Posted by AgentOrangeZone at 8:45 AM