Burn Pits – the Agent Orange of the Iraqi War

READ THE STORY
The same deadly chemicals found in the herbicide Agent Orange that was sprayed on the jungles of Vietnam during the Vietnam War are being released in burn pits on U.S. military bases across Iraq and Afghanistan. 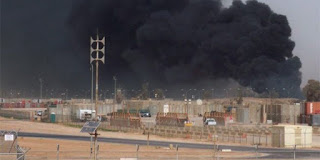 “Otherwise​ healthy U.S. service members are returning from deplo​yment with cancer, leukemia, respiratory illnesses and other chronic conditions,” said Chelsey Poisson, a RIC nursing student with prior military service in the R.I. Army ​National Guard. Poisson has made it her mission to advocate for service members who have been exposed​ to burn pits and to push for legislation to change military policies.
​​​Burn pits are massive holes backhoed in the ground to dispose of waste/garbage​ on U.S. military bases​. ​One of the largest burn pits​  – at Joint-Base Balad in Iraq – spanned 10 acres. Smaller metal barrels are used at smaller platoons. ​The danger, Poisson said, is what is being burnt in them.
“Everything is burned,” she said. “Because you’re in a war zone, you can’t call up the local waste management or recycling company t​o come by and pick up your trash. So the military thought the best way to get rid of their waste is to dig a large hole, pour in diesel fuel and set the trash on fire.”
“B​urn pits smolder for weeks or months at a time, often around the clock,” she said.
“When diesel fuel burns it releases benzene, a known carcinogen.”​ Benzene, she added, is also contained in many of the items being burned – paints, solvents, paint thinners, rubber, pesticides, chemically-treated uniforms, Styrofoam and plastics.

And plastics proliferate on base, she said​​. Plastic water bottles have replaced canteens,​​ and plastic utensils have replaced their metal counterparts. When plastic burns it releases the same dioxins found in Agent Orange, another known carcinogen. ​
Exposure to benzene, dioxins and other toxic chemicals ​occurs through inhaling or passively ingesting the fumes, gases or ashes. If toxic ash settles in water bottles, eating utensils or on ​cigarettes, it can be passively ingested orally, w​hile airborne ash that settles on the very fine Iraqi sand can enter the lungs during strenous work or outdoor exercises.
Joint-Base Balad, an air base, had one of the largest burn pits in Iraq, said Poisson. “On average, 147 tons of garbage were burned per day,” she said​. “Burning operations ran 24 hours a day, seven days a week, to keep up with the trash accumulating on the base.”
Posted by AgentOrangeZone at 11:22 AM