READ THE STORY
Bien Hoa Airport is the largest remaining dioxin hotspot in Vietnam.
Vietnam and the U.S. have kickstarted the process of cleaning up the dioxin around Bien Hoa Airport, a heavily contaminated zone just outside Ho Chi Minh City. 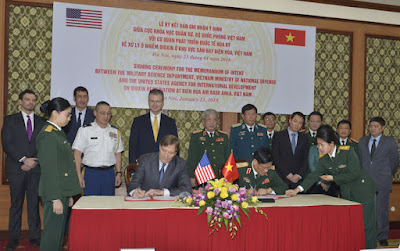 The process formally began on Tuesday with the signing of a Memorandum of Intent between the United States Agency for International Development (USAID) and the Military Science Department under Vietnam's Ministry of Defense.

USAID will be working with the Vietnamese ministry to first design a remediation program before implementing it over the next few years.
“The only way to begin a long journey is to take the first step. The Memorandum of Intent is that first step, and the journey begins today," said U.S. Ambassador to Vietnam Daniel J. Kritenbrink, who witnessed the signing together with Senior Lieutenant General Nguyen Chi Vinh, Vietnam's Deputy Minister of Defense.
"The United States looks forward to working with the Ministry of National Defense on this important initiative, deepening our partnership further, and building a prosperous future for both our countries.”
The campaign to decontaminate Bien Hoa is part of the two countries' cooperation that started in 2000 to resolve humanitarian and wartime legacies while continuing to strengthen their economic, cultural and security ties.
It will also be the second time the U.S. has been directly involved in a dioxin cleanup effort in Vietnam, following USAID and the defense ministry's $110 million campaign that took five years to clean dioxin-contaminated soil at Da Nang International Airport, which started in 2012.
Posted by AgentOrangeZone at 9:48 AM