READ ALL ABOUT IT!

Federal laws hindering proper research on medical marijuana are hurting those who served
Agitation. Irritability. Guilt. Flashbacks. Insomnia. Severe anxiety. Social isolation.
Consider for a moment what your life would be like if you suffered every day with just these symptoms.
It’s barely a taste of what veterans with post traumatic stress disorder endure.
Politically, one of the biggest rallying cries for all parties is “help our veterans” yet in many ways, our systems for veterans affairs — especially when it comes to dealing with their health care — fall woefully short. This is due to the combination of a lack of funding, a lack of resources and sometimes, just a lack of effort by the powers that be in Washington to move the dial forward on getting our service members the proper care they deserve and, quite frankly, have earned. 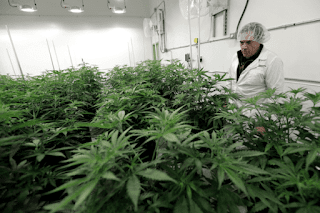 Veterans Affairs won’t study medical marijuana’s effect on veterans
The Department of Veterans Affairs says it will not conduct research into whether medical marijuana could help veterans suffering from post-traumatic stress disorder and chronic pain, as veterans groups are pushing for the use of the drug as an alternative to opioids and anti-depressants.
VA Clears The Air On Doctors Talking To Veterans About Marijuana Use
"Don't ask, don't tell" is how many veterans have approached health care conversations about marijuana use with the doctors they see from the Department of Veterans Affairs.
When the VA lies to Congress about medical marijuana, it lies to our wounded warriors
In October, the Democratic members of the House Veterans Affairs Committee wrote a letter asking VA secretary David Shulkin why his department is not conducting research into medical marijuana.
In the letter, ranking member Tim Walz (Minn.) and the other nine Democratic committee members note that in many states that have medical marijuana programs, cannabis is recommended for PTSD and/or chronic pain — conditions that afflict many of our wounded warriors. The members do not ask Mr. Shulkin to start dispensing medical marijuana from VA facilities. Instead, they ask the secretary why the department is not conducting rigorous research.
Harsh Response to VA Decision Not to Study Medical Marijuana for PTSD
WASHINGTON -- Despite pleas from congressmen, veterans and the country's largest veterans service organization asking for research into medical marijuana, the Department of Veterans Affairs won't initiate a study into the drug's effects on post-traumatic stress disorder, VA Secretary David Shulkin wrote in a letter to House Democrats.
The letter, dated Dec. 21 and publicly released Tuesday, was written in response to a request in October from Democrats on the House Committee on Veterans' Affairs for the VA to initiate research into the efficacy of medical cannabis. In their request, the Democrats cited the country's opioid crisis and the growing demand from veterans and major service groups that want cannabis available as a treatment option for chronic pain and PTSD.
Posted by AgentOrangeZone at 9:09 AM