Much of the pollution comes from the former Diamond Alkali facility in Newark during the production of the notorious defoliant known as Agent Orange.
READ THE STORY
The federal Environmental Protection Agency identified a portion of the Passaic River and Berry’s Creek in the Meadowlands on Friday as two Superfund sites that will receive more "intense attention" from the agency as it decides the best route for cleanups.
The two North Jersey sites are among 21 Superfund sites across the country that have been added to a special list requested by EPA Administrator Scott Pruitt to receive more immediate focus. 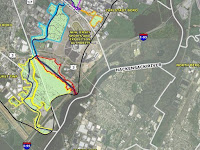 However, the new designation does not provide any additional funding to help with cleanups. And agreements with polluters, which often take years, will have to be secured.
The agency wants to target a nine-mile stretch of the Passaic River – from Belleville north to Clifton and Garfield – contaminated with cancer-causing dioxin.
Within the next month or two, companies and other entities responsible for the pollution are expected to submit to EPA an investigation they have been conducting that includes the nine miles, the agency said Friday evening.
The EPA already ordered polluters last year to conduct a $1.4 billion cleanup of the lower 8.3 miles of the river from Belleville south to Newark Bay.
MORE
Posted by AgentOrangeZone at 9:06 AM