Health monitoring and safety measures urged as U.S. denials fly in the face of mounting toxic evidence on island
http://www.japantimes.co.jp/community/2016/01/13/issues/vietnam-offers-lessons-okinawa-confronts-dioxin/#.VpfU9VLLpQJ
Last month, Urasoe in Okinawa pledged to conduct a survey of former base employees to ascertain the extent of environmental contamination at Camp Kinser, a 2.7-square-kilometer U.S. Marine Corps supply base located in the city just north of Naha. Urasoe’s director of planning, Setsuo Shimoji, announced the municipality would work with prefectural authorities to carry out the investigation, and that the city would also request funding from the national government. 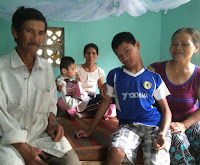 This is believed to be the first time that such a large-scale survey of former base workers has been launched in Japan.
Triggering Urasoe’s decision were Pentagon documents, obtained by The Japan Times under the U.S. Freedom of Information Act, that revealed serious contamination at Camp Kinser. According to the reports, military supplies returned during the Vietnam War leaked substances including dioxin (aka TCDD), polychlorinated biphenyls (PCBs) and insecticides within the base, killing marine life. Subsequent cleanup attempts were so ineffective that U.S. authorities worried civilian workers may have been poisoned in the 1980s, and, as late as 1990, they were concerned that toxic hot spots remained within the installation.
Following the FOIA release, United States Forces Japan attempted to allay worries about ongoing contamination at Camp Kinser. Spokesperson Tiffany Carter told The Japan Times that “levels of contamination pose no immediate health hazard,” but she declined to provide up-to-date environmental data to support her assurances.
Asked whether USFJ would cooperate with Urasoe’s survey, Carter replied that they had not been contacted by city authorities. She also ruled out health checks for past and present Camp Kinser military personnel.


Last year, suspicions that Camp Kinser remains contaminated were heightened when wildlife captured by Japanese scientists near the base was found to contain high levels of PCBs and the banned insecticide DDT.


Japanese officials are blocked from directly investigating pollution on U.S. bases because the Japan-U.S. Status Of Forces Agreement does not authorize them access. Although an amendment to SOFA last September gave Japanese authorities the right to request inspections following a toxic spill or imminent return of land, permission remains at the discretion of the U.S.
Consequently, until now research has been limited to land already handed back to civilian usage. These checks suggest that the problem of U.S. military contamination in Okinawa is chronic. In recent years, a range of toxins exceeding safe levels have been discovered on the island, such as mercury, lead and cadmium.
MORE
Posted by AgentOrangeZone at 9:13 AM