U.S. Involvement in the Vietnam War: the Gulf of Tonkin and Escalation, 1964

In early August 1964, two U.S. destroyers stationed in the Gulf of Tonkin in Vietnam radioed that they had been fired upon by North Vietnamese forces. In response to these reported incidents, President Lyndon B. Johnson requested permission from the U.S. Congress to increase the U.S. military presence in Indochina. On August 7, 1964, Congress passed the Gulf of Tonkin Resolution, authorizing President Johnson to take any measures he believed were necessary to retaliate and to promote the maintenance of international peace and security in southeast Asia. This resolution became the legal basis for the Johnson and Nixon Administrations prosecution of the Vietnam War. 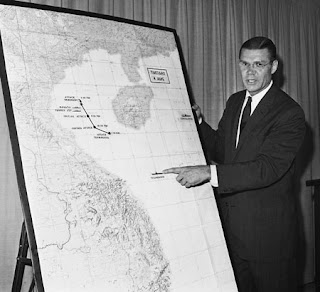 On August 7, 1964, Congress passed the Gulf of Tonkin Resolution, authorizing President Johnson to take any measures he believed were necessary to retaliate and to promote the maintenance of international peace and security in southeast Asia.
After the end of the First Indochina War and the Viet Minh defeat of the French at Dien Bien Phu in 1954, the countries meeting at the Geneva Conference divided Vietnam into northern and southern halves, ruled by separate regimes, and scheduled elections to reunite the country under a unified government. The communists seemed likely to win those elections, thanks mostly to their superior organization and greater appeal in the countryside. The United States, however, was dedicated to containing the spread of communist regimes and, invoking the charter of the Southeast Asia Treaty Organization (1954), supported the South Vietnamese leader, Ngo Dinh Diem, when he refused to hold the elections. Diem held control of the South Vietnamese Government, but he could not halt the communist infiltration of the South. By 1959, the Viet Cong, South Vietnamese communist guerillas, and the Viet Minh, began a large scale insurgency in the South that marked the opening of the Second Indochina War.
Ngo Dinh Diem failed to capture the loyalties of the people of South Vietnam the way that Ho Chi Minh had done among the population of North Vietnam. Despite U.S. support, Diem’s rural policies and ambivalent attitude toward necessary changes like land reform only bolstered support for the Viet Cong in the southern countryside. By 1963, Diem’s rule had so deteriorated that he was overthrown and assassinated by several of his generals with the tacit approval of the Kennedy Administration. Three weeks later, U.S. President John F. Kennedy was also assassinated, and the war continued under new leadership in both countries. Before his death, Kennedy had increased the U.S. advisory presence in South Vietnam in the hopes that a U.S.-supported program of “nation-building” would strengthen the new South Vietnamese government. However, South Vietnam continued to experience political instability and military losses to North Vietnam. 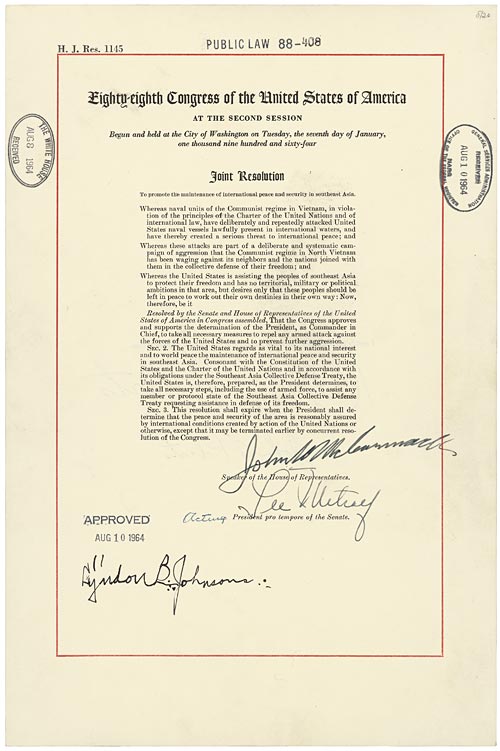 By August, 1964, the Johnson Administration believed that escalation of the U.S. presence in Vietnam was the only solution. The post-Diem South proved no more stable than it had been before his ouster, and South Vietnamese troops were generally ineffective. In addition to supporting on-going South Vietnamese raids in the countryside and implementing a U.S. program of bombing the Lao border to disrupt supply lines, the U.S. military began backing South Vietnamese raids of the North Vietnamese coast. The U.S. Navy stationed two destroyers, the Maddox and the Turner Joy, in the Gulf of Tonkin to bolster these actions. They reported an attack by North Vietnamese patrol boats on August 2, and a second attack on August 4. Doubts later emerged as to whether or not the attack against the Turner Joy had taken place.
Immediately after reports of the second attack, Johnson asked the U.S. Congress for permission to defend U.S. forces in Southeast Asia. The Senate passed the Gulf of Tonkin Resolution with only two opposing votes, and the House of Representatives passed it unanimously. Congress supported the resolution with the assumption that the president would return and seek their support before engaging in additional escalations of the war.
The Gulf of Tonkin incident and the subsequent Gulf of Tonkin resolution provided the justification for further U.S. escalation of the conflict in Vietnam. Acting on the belief that Hanoi would eventually weaken when faced with stepped up bombing raids, Johnson and his advisers ordered the U.S. military to launch Operation Rolling Thunder, a bombing campaign against the North. Operation Rolling Thunder commenced on February 13, 1965 and continued through the spring of 1967. Johnson also authorized the first of many deployments of regular ground combat troops to Vietnam to fight the Viet Cong in the countryside.
Posted by AgentOrangeZone at 1:29 PM