Participants and victims of this secret chapter of the Iraq war discuss exposure to chemical weapons.
It was August 2008 near Taji, Iraq. They had just exploded a stack of old Iraqi artillery shells buried beside a murky lake. The blast, part of an effort to destroy munitions that could be used in makeshift bombs, uncovered more shells.
Two technicians assigned to dispose of munitions stepped into the hole. Lake water seeped in. One of them, Specialist Andrew T. Goldman, noticed a pungent odor, something, he said, he had never smelled before.
He lifted a shell. Oily paste oozed from a crack. “That doesn’t look like pond water,” said his team leader, Staff Sgt. Eric J. Duling.
The specialist swabbed the shell with chemical detection paper. It turned red — indicating sulfur mustard, the chemical warfare agent designed to burn a victim’s airway, skin and eyes.
All three men recall an awkward pause. Then Sergeant Duling gave an order: “Get the hell out.” 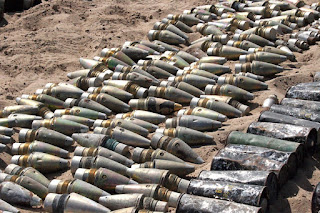 Five years after President George W. Bush sent troops into Iraq, these soldiers had entered an expansive but largely secret chapter of America’s long and bitter involvement in Iraq.
From 2004 to 2011, American and American-trained Iraqi troops repeatedly encountered, and on at least six occasions were wounded by, chemical weapons remaining from years earlier in Saddam Hussein’s rule.
In all, American troops secretly reported finding roughly 5,000 chemical warheads, shells or aviation bombs, according to interviews with dozens of participants, Iraqi and American officials, and heavily redacted intelligence documents obtained under the Freedom of Information Act.


The United States had gone to war declaring it must destroy an active weapons of mass destruction program. Instead, American troops gradually found and ultimately suffered from the remnants of long-abandoned programs, built in close collaboration with the West.
The New York Times found 17 American service members and seven Iraqi police officers who were exposed to nerve or mustard agents after 2003. American officials said that the actual tally of exposed troops was slightly higher, but that the government’s official count was classified.
MORE
Posted by AgentOrangeZone at 7:57 AM