What were they thinking? - It's The Right Thing To Do

"According to a Zogby Poll from 2004, 79.1 percent of Americans agree that the chemical companies should have had to pay compensation to American veterans who were exposed to Agent Orange, and 51.3 percent agree that Vietnamese victims should receive US compensation.

From a moral standpoint, 64.4 percent agree that the US government "has a moral responsibility to compensate US servicemen and Vietnamese civilians who were affected by Agent Orange." People 18 to 29 years old were the demographic most likely to endorse compensation for the victims, demonstrating a commitment of the younger generations to reconciliation and foreign policy conducted within a framework of morality."

Posted by AgentOrangeZone at 7:40 AM No comments: 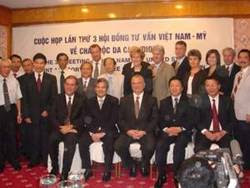 “Of the 8.7 million Americans that served in the Vietnam War, some 2.6 million may have been exposed to Agent Orange. Exposure from Agent Orange is known to cause numerous health ailments, including cancer. We believe that it is important to increase awareness to this dangerous chemical and those veterans who were exposed to it,” said the Senators in a joint statement.

The Senators’ Resolution was strongly endorsed by the Vietnam Veterans of America and the Veterans of Foreign Wars (VFW) of the United States which wrote, “The VFW thanks you for your efforts and your continued dedication to doing what is right for America’s veterans.”

An expert panel reported on Friday that two more diseases may be linked to exposure to Agent Orange, a defoliant used by the American military during the Vietnam War.

People exposed to the chemical appear, at least tentatively, to be more likely to develop Parkinson’s disease and ischemic heart disease, according to the report. The report was written by a 14-member committee charged by the Institute of Medicine with determining whether certain medical conditions were caused by exposure to herbicides used to clear stretches of jungle.

The results, though not conclusive, are an important first step for veterans groups working to get the government to help pay for treatment of illnesses they believe have roots on the battlefield. Some other conditions linked to Agent Orange already qualify.

Claud Tillman, a 61-year-old veteran from Knoxville, Tenn., who lost his job repairing guns after he received a diagnosis of Parkinson’s disease, said those benefits could help dig him out of tens of thousands of dollars in debt.

Mr. Tillman has not worked since March 2007 and now lives on loans from relatives, including his son. “It sure has messed my life up,” said Mr. Tillman, who said he was sure he became ill after exposure to Agent Orange while serving in Vietnam. “I don’t know how to explain it. It won’t be long till I’m living under a bridge. I am confident that that’s where it came from, but there’s no way to prove it.”

Since 1994 the Institute of Medicine committee has found 17 conditions associated with exposure to the chemical, 13 of which qualify veterans for service-connected disability benefits provided by the Department of Veterans Affairs.

In its latest report, the committee found “limited or suggestive evidence” linking the herbicide to Parkinson’s and ischemic heart disease. In the past, that has been enough evidence of a link to prompt benefits for some conditions but not for others.

The group Vietnam Veterans of America plans to write a letter to the secretary of veterans affairs, Eric K. Shinseki, asking for extended benefits, said Bernard Edelman, the organization’s deputy director for policy and government affairs.

The report notes that its conclusions about ischemic heart disease, a condition that restricts blood flow to the heart, causing irregular heartbeats and deterioration of the heart muscle, are still tentative because it is difficult to separate confounding risk factors like age, weight and the effects of smoking.

The link between Parkinson’s disease and Agent Orange is also uncertain because, while new studies have strengthened the connection between the condition and certain chemicals, there is still no data on veterans and the condition.
Posted by AgentOrangeZone at 1:10 PM No comments: