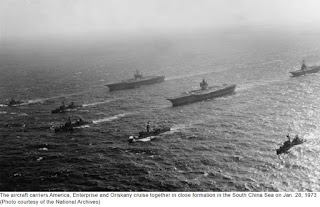 In a move that should speed up disability claims for some Vietnam veterans, officials announced Monday they have completed digitizing thousands of deck logs from ships stationed offshore during that war, enabling researchers to better determine where troops served and what toxins they may have encountered.

National Archives and Records Administration officials. The move was prompted by legislation passed in summer 2019 mandating VA award presumptive benefits status to veterans who served in the waters off Vietnam during the war there five decades ago.

Department officials said they have awarded roughly $641 million to more than 22,524 blue water Navy veterans or survivors since the start of this year. But advocates have estimated that as many as 90,000 Vietnam veterans may be eligible for those payouts, and the digitized deck logs are expected to help with that application process.

The move ends a years-long fight to get faster disability benefits for up to 90,000 Navy veterans who served in Vietnam.

In a statement, VA Secretary Robert Wilkie said the move should make it easier for veterans “to receive the benefits they’ve earned without burdening them with paperwork.”

At issue is how the department had handled claims related to Agent Orange exposure during the Vietnam War.

Under previous VA rules, service members who were stationed on the ground or on ships near the coast were presumed to have had exposure to the chemical defoliant and other carcinogenic herbicides. When illnesses arose later in life and they applied for disability claims, their claims were approved without requiring additional documentation.

Posted by AgentOrangeZone at 12:40 PM