'Poisoning the Pacific': New book details US military contamination of islands and ocean

In 1968, Leroy Foster was a master sergeant in the US Air Force, assigned to the Anderson Air Force Base in Guam, a United States island territory in the Pacific. The day after he arrived on the island, he recalled being ordered to mix “diesel fuel with Agent Orange”, then spraying “it by truck all over the base to kill the jungle overgrowth”. 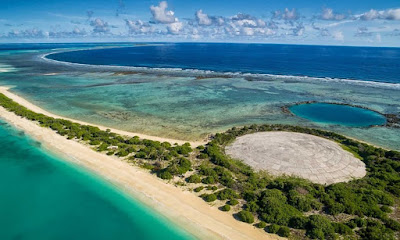 Soon after, Foster suffered serious skin complaints and eventually fell sick with Parkinson’s and ischemic heart disease. Later, his daughter had cancer as a teenager, and his grandchild was born with 12 fingers, 12 toes, and a heart murmur. Foster died in 2018.

A new book, Poisoning the Pacific, to be released Monday, chronicles the US military’s decades-long contamination of indigenous lands across the Pacific as well as the ocean itself, endangering lives and ecosystems across the vast Pacific Ocean.

Written by British journalist Jon Mitchell, Poisoning the Pacific is based on more than 12,000 pages of documents obtained under the US Freedom of Information Act (FOIA) and through interviews with local residents, military veterans and researchers.

The book argues that for decades, the US has treated its territories in the Pacific with negligence, allowing its military to violate indigenous rights, seize land, and damage delicate ecosystems.

US military planes parked on the tarmac of Andersen Air Force base on the island of Guam, a US Pacific Territory.

Alongside Foster’s case - after years of campaigning the airman was ultimately compensated for his exposure on the island - Mitchell’s book details US military operations over decades contaminating the Pacific with toxic substances including radioactive waste, nerve agents, and dioxin-tainted Agent Orange.

“US authorities have repeatedly tried to cover up contamination through lies, disinformation and attacks on reporters,” Mitchell told The Guardian. “I have experienced this pressure firsthand.”

Posted by AgentOrangeZone at 9:39 AM