‘Greater Love Hath No Man:’ Marines in Congress request Camp Reasoner sign be sent from Vietnam to the US 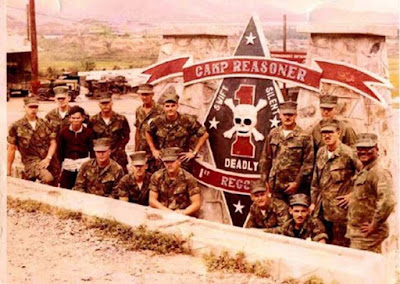 The camp was named after 1st Lt. Frank Reasoner, the second Marine to receive the Medal of Honor during the war, and was marked by a stone that bore a hand-lettered message to the fallen Marine.

“'First Lieutenant Reasoner sacrificed his life to save one of his wounded Marines. ‘Greater Love Hath No Man,’” the stone said, according to the Marine Corps University.

On Monday 12 Marine veterans and members of the House of Representatives sent a letter to Secretary of State Mike Pompeo calling on him to begin negotiations with Vietnam to have the stone sent to the U.S. where the 1st Reconnaissance Battalion will host it on Camp Pendleton, California.

Posted by AgentOrangeZone at 9:25 AM