Dioxin-contaminated land within reservation boundaries to be cleaned again

CASS LAKE—A section of land in the city of Cass Lake with contaminated soil will likely receive another round of cleaning once the federal government finishes preparations. 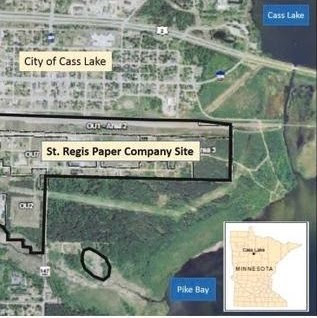 The land to be worked on is part of the former St. Regis Paper Co. facility, which was later bought by Champion International Inc. and now International Paper Co. When it was running, the facility used creosote and other chemicals to treat wood.
The 125-acre site, just south of the train tracks and east of Aspen Avenue (state Highway 371) near Pike Bay, has been designated as an EPA Superfund location. According to the EPA, Superfund sites are those that contain hazardous substances and pollutants that could harm the local ecosystems. In 1980, the "Superfund" law was enacted that outlines how areas must be cleaned up and who pays for the work.
In the years after the site closed operations in the mid-1980s, the MPCA and tribal officials began identifying contamination at various areas on the site, according to Levi Brown, environmental land director for the Leech Lake Division of Resource Management.
The EPA became the lead agency for the site in 1995 and the agency conducted soil sampling in 2000, and from 2004-2006, a total of 3,900 tons of contaminated soil was removed from an area on the site.
Additional soil sampling in 2012-2013 also identified pollutants and the need for additional work for the site. In the latest cleanup project, the EPA is proposing to excavate contaminated soil from the site and other residential property and backfill the area with clean dirt and plant new vegetation.
MORE
Posted by AgentOrangeZone at 10:39 AM