For the first time, documents released under the U.S. Freedom of Information Act reveal extensive pollution on an active American base in Japan.

Located in the center of Okinawa island, Kadena Air Base is the largest U.S. Air Force installation in Asia.Equipped with two 3.7-kilometer runways and thousands of hangars, homes and workshops, the base and its adjoining arsenal sprawl across 46 square kilometers. More than 20,000 American service members, contractors and their families live or work on the base alongside 3,000 Japanese employees. 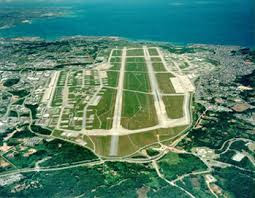 Kadena Air Base hosts the biggest combat wing in the U.S. Air Force — the 18th Wing — and, during the past seven decades, the installation has served as an important launchpad for wars in Korea, Vietnam and Iraq.
Given the long history of Kadena Air Base and its city-sized scale, it is easy to understand why the U.S. Air Force calls it the “keystone of the Pacific.”
But until now, nobody has realized the damage the base is inflicting on the environment and those who live in its vicinity. Documents obtained under the U.S. Freedom of Information Act reveal how years of accidents and neglect have been polluting local land and water with hazardous chemicals, including arsenic, lead, polychlorinated biphenyls (PCBs), asbestos and dioxin. Military authorities have often hidden this contamination, putting at risk the health of their own service members and the 184,000 civilians living in neighboring communities.
This week, we examine the pollution of local water resources and the exposure of on- and off-base residents to lead and asbestos. The accompanying article explains the flaws in current guidelines that allow the U.S. military in Japan to conceal such contamination.
Next week, we will investigate the installation’s ongoing struggles to manage contamination from PCBs, its coverup of the discovery of hazardous waste near two on-base schools and the human impact of this pollution.
In January, the U.S. Air Force released 8,725 pages of accident reports, environmental investigations and emails related to contamination at Kadena Air Base. Dated from the mid-1990s to August 2015, the documents are believed to be the first time such recent information detailing pollution on an active U.S. base in Japan has been made public.
MORE
Posted by AgentOrangeZone at 8:42 AM