http://www.postguam.com/local/news/43854-study-finds-link-between-agent-orange-and-infant-mortality-on-guam.html#.VqJquFLLpQK
Infants born to mothers who lived in Agent Orange-sprayed areas were at an increased risk of infant mortality due to congenital anomalies, according to scientists who recently released the first study that examined the link between herbicides and infant mortality on Guam. 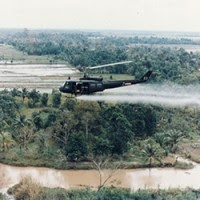 The study, published in the December 2015 issue of the Hawaii Journal of Medicine and Public Health, covered medical data between 1970 and 1989, which indicated large inter-village disparities in infant mortality.
“Because of AO's (Agent Orange) potentially long half-life, environmental studies are also required to determine if AO has persisted in the Guamanian soil, and if present, studies of the current population on Guam area needed to determine if AO continues to be a public health threat,” states the study authored by Jonathan K. Noel, Sara Namazi and Robert Haddock.
Data collected from Guam's Office of Vital Statistics were classified as Agent Orange and non-Agent Orange spray areas. “Village location was classified by usual residence of the mother. Linear regression was used to determine associations between infant mortality due to congenital anomalies and the behavioral, structural and environmental factors,” the study states.
The study indicated that the association between Agent Orange spray areas and infant mortality due to congenital anomalies “was statistically significant under univariable and multivariable conditions.”
“The study presented here is the first to identify associations between AO and infant mortality in civilian populations outside of Southeast Asia, but it is important to stress that the ecological design of the study makes causal inferences of the study results impossible,” the authors said.
Warfare program
Agent Orange was one of the defoliants – known as “rainbow herbicides" – used by the U.S. military as part of its herbicidal warfare program during the Vietnam War from 1961 to 1971. They were used to destroy bushes, trees and vegetation to deprive insurgents of cover and food crops as part of a starvation campaign in the early 1950s.
While military officials have consistently denied that the U.S. military used Agent Orange outside of Vietnam, veterans who were stationed on Guam have testified in several forums that they sprayed Agent Orange in military facilities and defense properties on Guam including tank farms, a cross-island pipe line, pump houses, hydrant pits and filtering systems at Andersen Air Force Base.
Guam veterans believe they contracted various types of diseases including type 2 diabetes mellitus complicated as a result of their exposure to Agent Orange.
During a 2003 inquiry conducted by former Congressman Lane Evans, then a member of the House Committee on Veterans Affairs, the Department of Defense confirmed about 5,000 drums of herbicide Agent Purple were transported to Guam and stored in an undisclosed area in 1952 in anticipation of use on the Korean peninsula but claimed they were never used and were returned to the United States.
“The department has no record of the use, storage or testing of herbicides Orange, Blue or White on Guam,” Phillips W. Grone, then-deputy undersecretary of the Department of Defense, said in a Sept. 23, 2003 letter to Evans.
These denials, however, were contradicted by the decisions made by the Department of Veterans Affairs in separate cases between 2005 and 2013, acknowledging that herbicides, particularly Agent Orange, were used on Guam from 1968 to 1970.
Carcinogenic
According to scientists, Agent Orange is a mixture of trichlorophenoxyacetic acid and dichlorophenoxyacetic acid and has been linked to numerous health effects, primarily caused by contamination with tetrachlorodibenzodioxin or TCDD.
“TCDD has been classified as carcinogenic to humans by the International Agency for Research on Cancer and as a probable human carcinogen by the U.S. Environmental Protection Agency (EPA),” the study says. “There is also evidence suggesting that AO exposure is associated with ischemic heart disease, Parkinson's disease, and respiratory cancers.”
The authors of the study noted that infant and fetal exposure to Agent Orange can occur “through paternal and maternal mechanisms, with recent evidence showing breast milk as an important AO vector.
“Moreover, children of fathers who served in southeast Asia during the Vietnam War and participated in Operation Ranch Hand, the U.S. Department of Defense's defoliation program during the war, had significantly greater risk of infant death compared to children of fathers who served in Southeast Asia but did not participate in the operation,” the study said.
Posted by AgentOrangeZone at 9:52 AM