Agent Orange and Us

Fred A. Wilcox,author, Waiting for an Army to Die: The Tragedy of Agent Orange

October is Agent Orange month, a time to remember tens of thousands of Vietnam veterans, and a million or more Vietnamese who have died from their exposure to toxic herbicides. 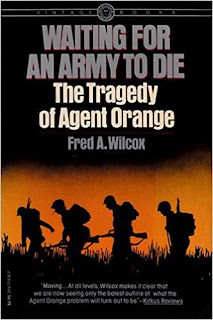 The United States military used Agent Orange in Vietnam to drive the enemy out of its hiding places and to starve peasants off their land.

Soldiers did not know that the water they drank and the food they consumed in-country were contaminated with deadly chemicals. When they got sick, when their children were born with deformities and their fellow soldiers started to die, they sought help from the government they’d served. Only to be told their problems were psychological. They were accused of being malingerers, after money; told they were suffering from shell shock, later called PTSD.

Chemical companies that profited from manufacturing herbicides for use in Vietnam refuse to help veterans, nor have they offered to compensate Vietnamese victims of chemical warfare. There is no evidence, insist Dow, Monsanto, et.al, that Dioxin harms human beings.

Veterans know this is a big lie. They watched triple canopy jungles die after being doused with Agent Orange. Mangrove forests sprayed with defoliants withered away. Monkeys fell from trees, fish floated to the surface of waters. The military dropped leaflets, telling the Vietnamese not to worry, herbicides were harmless to humans and animals.

Decades later, we thank veterans for their service. But are we willing to listen when they talk about Agent Orange? After all, the United States is not a war zone. Agencies like the Environmental Protection Agency are in place to protect us from harm. Multinational corporations are not allowed to use our environment for their own toxic waste dump.

Agent Orange is about the cancer epidemic that is killing our friends, neighbors, friends and family. We like to think that scientists are about to find a cure for cancer. We eat organic food, drink purified water, and take lots of vitamins, hoping to avoid getting cancer.

Unfortunately, these survival strategies aren’t working. With friends in high places, the polluters know they can kill their fellow Americans with impunity. Sending tens of thousands of veterans to early graves did not diminish corporate profits. No need to stop dumping carcinogens into our water, poisoning our food, and filling hospitals with sick and dying children.

Vietnam and the United States are now friends. One day Vietnam’s defoliated forests may grow back, women will no longer give birth to deformed babies, children will grow up in a clean environment.

There must never be another tragedy like Agent Orange.

Posted by AgentOrangeZone at 10:33 AM