Monsanto needs to be responsible for AO recovery: Spokesperson

READ THE STORY
Foreign Ministry’s spokesperson Le Thi Thu Hang has stated that the US companies and Monsanto in particular need to hold responsibility for assisting efforts to recover from Agent Orange (AO)/dioxin consequences in Vietnam.
She made the statement during a regular press conference in Hanoi on April 20 in reply to reporters’ queries about Vietnam’s response to the International Monsanto Tribunal’s conclusion that Monsanto destroyed the ecosystem and caused losses to the Vietnamese people during the war. 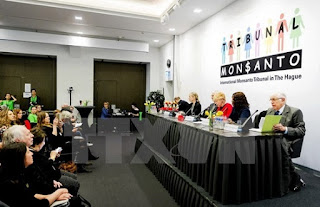 Vietnam welcomes the International Monsanto Tribunal’s ruling on April 18, she said, adding that Monsanto’s environment destruction constitutes objectively the severe war consequences in Vietnam, especially due to the impact of the AO sprayed by the US troops.
The spokeswoman asked Monsanto to respect the tribunal’s consultation recommendations and soon take practical actions to deal with the consequences left over by AO/dioxin.
Hang also spoke highly of the US government, parliament and people for their recent active moves to aid the settlement of war aftermaths in Vietnam, including the AO.
The Monsanto Tribunal has found Monsanto – an US multinational chemical firm – is guilty of ecocide, which has left long-term consequences on the ecosystem of various nations, including Vietnam.
The conclusion was delivered by five international judges in The Hague, the Netherlands, on April 18 after six months of investigation and two days of testimony.
Once being among producers of Agent Orange/dioxin for the US army during wartime in Vietnam, the biotech giant now produces pesticides and genetically modified plants.
The judges said Monsanto has engaged in practices which have negatively impacted the human rights to a healthy environment, food and health.
Convened by civil society groups, the tribunal's findings are not legally binding.
However, Judge Françoise Tulkens, chair of the Monsanto Tribunal, said the conclusion was drawn based on acknowledged reports and evidence.
Victims of toxic chemicals and corporate power can use the conclusions in their liability cases against Monsanto and similar companies, according to the judge.
The findings will be submitted to the United Nations, UN Human Rights Committee, International Criminal Court, and Monsanto.
MORE
Posted by AgentOrangeZone at 11:55 AM