READ THE STORY
Between 1962 and 1971, U.S. forces sprayed 72 million liters of herbicidal agents across rural Vietnam. The most notorious of these, Agent Orange, decimated forests and exposed millions of Vietnamese—as well as U.S. soldiers—to dioxin, a highly toxic compound linked to a long list of illnesses. 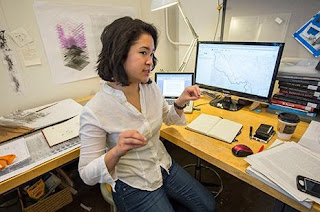 "As a landscape architect, I'm trained to think about how systems interact," Vo said. "Topography shapes distribution, but so do water and climate and the movements of animals and people. Agent Orange is an environmental issue, a scientific issue, a medical issue, a community development issue, a political issue...You really can't separate them."
Last summer, Vo traveled to the A Lưới Valley—near where her father was raised, in the city of Huế—thanks to a prestigious Deborah J. Norden grant from the Architectural League of New York.
Hoping to explore the continuing imprint of past violence, Vo compared contemporary ground conditions to GIS mapping data, declassified military maps, and other sources. The results could be revealing. For example, dispersal patterns tended to track closely with roads and supply routes along the valley floor. The worst hot spots remain concentrated near former military installations, where chemicals had been spilled, leaked, or bombed.
"Dioxin breaks down with sunlight, but once it gets into the soil, it's no longer exposed to sunlight," she said. "It's a persistent toxin." Both the human toll and environmental legacy "will continue for generations."
MORE
Posted by AgentOrangeZone at 11:46 AM