“The Most Toxic War in History” – 25 Years Later 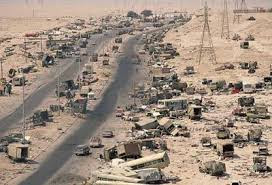 This month marks the 25th anniversary of the start of Operation Desert Storm, the combat phase of the Gulf War. Precipitated by Iraq’s invasion and annexation of Kuwait in August 1990, the conflict was the first to see the widespread use of depleted uranium (DU) ammunition. US and UK forces subsequently acknowledged firing a combined 286,000kg of DU – the vast majority of which was fired by US Abrams and M60 tanks, and A10 and Harrier aircraft.
The decision to deploy the radioactive and chemically toxic weapons, which had been under development since the 1950s as a response to Cold War concerns over defeating Soviet armoured divisions, would prove highly contentious in the following years. Once the media and military’s enthusiasm for what was promoted as a new paradigm in high-tech low-casualty warfare began to subside, veterans, journalists and civil society organisations in the US and UK increasingly began to challenge the general conduct of the war, and the use of DU in particular.
This was largely to be expected, and had been anticipated just six months before the conflict in a US military study on the environmental and health risks of DU: “Public relations efforts are indicated, and may not be effective due to the public’s perception of radioactivity. Fielding and combat activities present the potential for adverse international reaction.” Those wishing to continue to use DU weapons recognised that they would need to plan vigorous public relations efforts in order to justify their continued use, a pattern that continues today. Following 1991, this saw DU branded as the “Silver Bullet” – a weapon capable of such astonishing feats, and so militarily important, that any concerns over its potential health or environmental impacts should be disregarded.
“The most toxic war in history” 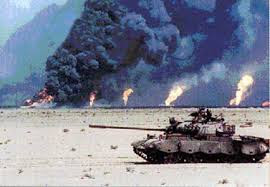 As increasing numbers of veterans began to report post-deployment health problems in the years that followed, attention began to focus on the overall toxicity of the conflict. From oil fires and pesticides, to the use and disposal of chemical weapons, the Gulf War was increasingly viewed as “the most toxic in history”. Whether it was – conflict pollution had been developing in concert with the mechanisation of warfare and industrialisation throughout the 20th Century, or whether this just represented a growing awareness of the linkages between chemicals and health is a matter of debate. Nevertheless, questions were asked about whether possible exposures to a suite of chemicals could be responsible for the ailments reported by veterans. These ranged from birth defects to chronic fatigue, and led to the emergence of the catch all term Gulf War Syndrome (GWS).
MORE
Posted by AgentOrangeZone at 3:40 PM